The Hurt Locker movie matched with a military meal

– Sergeant First Class William James (Renner) arrives in Iraq as the new leader of an elite bomb disposal squad. He’s a renegade, a cool and fearless character with an appetite for bombs. When he meets the rest of his team, Sergeant J.T Sanborn (Mackie) and Specialist Owen Eldridge (Geraghty) they don’t exactly become bosom buddies.
– Tension builds between Sanborn and James to the point where J.T considers killing James.
– James’ track record starts to get hammered, things get ugly and James makes a pretty stupid decision which results in death and despair.

Soldiers get mighty hungry and one of their favourite snacks (according to the ever-reliable Google) are Egg Rolls, otherwise known in Australia and other places as Spring Rolls. I love these hot, deep fried crunchy snacks. So build up your military appetite and make these tonight. Here’s the recipe… 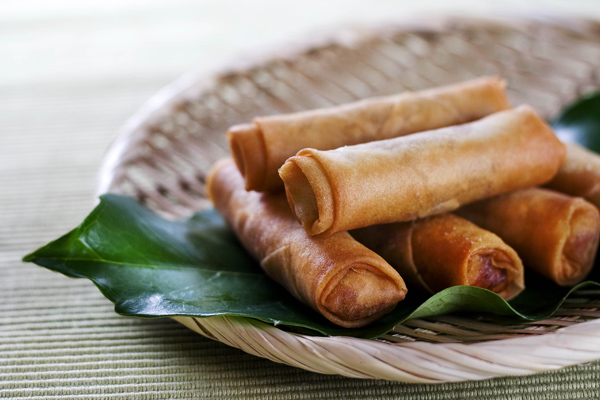 The thing about this film is that, from the first scene, you don’t know which bomb is going to go off and which coloured wire is the right one to cut! It’s as if you are the one in the bomb suit, with your heart pounding in a life and death kinda situation (which you’re not, you’re really sitting in a comfy lounge, tucked under a warm blanket, sipping on a glass of red and chomping down on spring/egg rolls… right?). But as this film is shot like a documentary, it feels all too real.

This is not a feel good movie, most great films aren’t but considering the small budget and the hellish weather and the difficult location, full marks to Bigelow and her crew. The themes may not be pleasant to watch but it is storytelling at its best, so it’s worth at least one viewing because it tries to give a voice to those real soldiers and the people of Iraq, suffering, fighting and fearing for their lives on a daily basis and that must be worth two hours of your time!

Every hard working man and woman in a battle field craves comfort food and what fills a hungry stomach better than a casserole? So here’s an Army favourite: Chilli Con Carne and Cornbread muffins. Oh my!

Nothing says ‘home’ to an American soldier in Iraq like Key Lime Pie with a healthy dob of double cream. Is your mouth watering? Mine is. Here’s the delicious recipe from Taste.com.au

If you found yourself on the battlefield what dish would you crave?